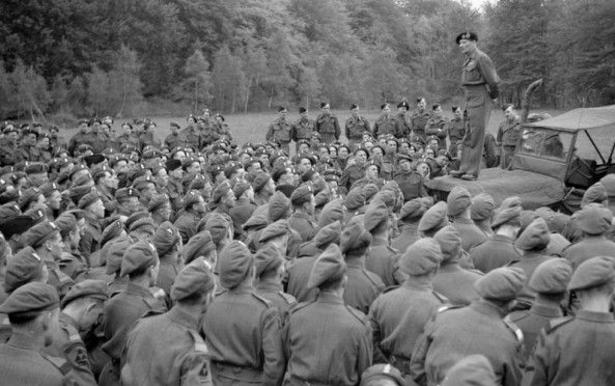 In early June 1944, General Montgomery stood on the bonnet of his jeep at Hambledon in Hampshire and addressed the troops prior to Operation Overlord, commonly known as D-Day 6th June 1944. This was the Allied invasion of Nazi occupied Europe, the largest amphibious invasion in history. Part of Creech Wood near Denmead was used for the build-up of troops for D​-Day​, known as assembly camps  or marshalling areas A11 and A12. Many of the woods around Portsmouth and along the South Coast were used for this purpose.

From April 1944 the troops camped here in Bell Tents​. Their days were  spent waterproofing and painting vehicles, training, checking kit and writing home to loved ones. Whilst the men knew they were mustering for the invasion, they had no idea where they were going until they were on the ships and landing craft ​heading for Normandy.

By midnight on the 6th June, 132,000 Allied forces had landed in France. By August, Two million men had been sent across the English Channel. 3,850 of these men and 300 vehicles from many different units were camped here including General Sir Bernard Montgomery’s Tactical Headquarters and the Headquarters of the 3rd  British Infantry Division, plus Canadian Troops of the Stormont, Dundas and Glengarry Highlanders and Americans on the other side of the road. In the days and weeks before D-Day the camps were sealed off. Eyewitness accounts refer to lines of tanks parked along the road through the woods.

A vast amount of buildings were erected to cater for so many troops including a large bake house and two equally as large cook houses the remains of which are still visible  As you wonder around the woods you will come across many other buildings and on the map you will see what some of these were used for and where other tents and huts were situated.

The grease traps were used to save as much grease as possible from cooking for other uses as it was in short supply After D-Day, Creech Wood was used as a Prisoner of War camp for German and Italian prisoners. However they did not see eye to eye and eventually had to be separated. There was the occasional escape but they did get far and were normally recaptured around Catherington. They passed the time making wooden toys, clocks and boxes. Payment for these items was cigarettes, chocolate and fruit cake that latter of which was in very short supply. They were permitted to walk around Denmead Village and work in local farms and nurseries and wore a uniform of a dark brown battledress with a large orange square on the back and on the trousers.

There were no Officers in the camp, British or German. The  German Camp Commandant being the same rank as the British Company Sergeant Major that was put in charge of the camp. He was a very fair man who treated the prisoners with respect and described them as “a jolly good bunch of lads”. He even threatened to withdraw their labour from local farms if they were not treated fairly. He had Lurcher dog called “Jock” who was very popular amongst the inmates.

The Geneva Convention for the holding of Prisoners of War does not permit them to live under canvas during the winter months so they had to build their own accommodation. The brick and concrete remains of some of the huts can still be seen today. There were many different buildings from Nissen huts to pre-fabricated wood and concrete buildings but the prisoners predominantly lived in the Nissen huts.

At the end of the war, some  of the German POW's chose to stay and  remained locally working on the land and marrying local women. One of them became a priest in Purbrook.