Funds raised through Paypal and gofundme so far 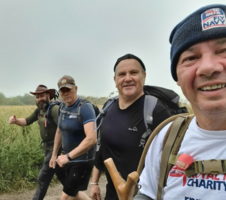 We want to try and raise some funds to support our WW2 Veterans who found the past 18 months very difficult. Often on their own for weeks without visitors or any interaction with others. One of our veterans said he would rather be back in the POW camp as at least he had people to talk to. We did our best to supply, films, books, jigsaws etc to help them through this situation. But funds are running low. The veterans who meet up monthly are all missing each other, so we want to hold a lovely big lunch party for them all so they can all get back together and enjoy each others company.

To help raise funds, one of the Project 71 volunteers, had an idea for a sponsored Yomp.

"It was one of those times where a casual conversation turned into something altogether more serious and involving for all concerned. Some years back Manny, an ex RN aircraft engineer, had proposed undertaking ‘The Commando Challenge’ run at the Clan Cameron estate at Achnacarry.

For reasons of health the challenge was never realised but the ember continued to smoulder until a chance Facebook conversation with Jumper, a former RM Commando, resurrected the subject and within a few hours the Inverailort2Achnacarry challenge was born. All that remained was to coerce Cheesy(Chris) another ex RN aircraft engineer, into the challenge along with Mark, a serving Officer in the British Army, as driver; and the team was set.

The challenge is a cross country route that starts at HMS Dorlin and finishes at Anchnacarry Castle, the two locations most prominent in the history of the Commandos and serendipitously entails a route of around 60 miles, the distance current day Commando’s complete as their final Commando test across Dartmoor only we are doing it twice. The route also takes us past the memorial to XF702, the crash site of an RAF Shackleton that went down in 1967, with the sad loss of all 13 crew on-board."

We are hoping to raise sufficient funds to help Project 71 support the veterans through these hard times and into the future."

THE WALK - IN DETAIL

The Walk starts at the site of the old HMS Dorlin, then cross country evening walk before a short night stopover, then onto the memorial to XF702 and day 1 ends at the 3/4 point on the north shore of Loch Arkaig.

Day 2 commences at the overnight point and the first stop is Achnacarry Castle, then onto the Commando memorial and Spean bridge station. From there we head to the foot of Ben Nevis on the northern side past the Nevis Range Mountain Resort, and then head to the summit of Ben Nevis and return via the Mule track to finish at the Glen Nevis Youth Hostel for pick up back to Fort William - 60 miles in total.

Click on the photo above for more details of the team​

You can also sponsor through GoFundMe here